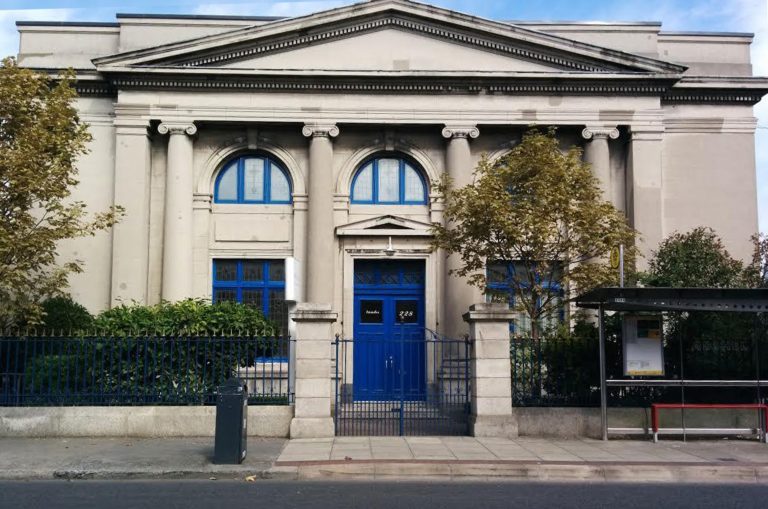 In 1925 the Dublin United Hebrew Congregation opened a new synagogue on the South Circular Road Road at Dolphin’s Barn. The building was designed by architects O’Rourke, Aubrey Vincent in 1924 in the Classical architectural manner with exterior details including a Portico with the three arched windows with ionic capitals and an empty tympanum surrounding by dentil mouldings. The windows carried the Star of David. In 1980 when the congregation had significantly diminished the building was closed and subsequently became the headquarters of a technology company. The only remaining items remaining from its former life are the Star of David windows.

The Aron Kodesh was made in 1925 by the firm Abraham Noyek of Parnell Street Dublin which was in existence from 1890 to 1965. Its design had strong architectural elements which matched the design of the building. The main structural timber is Central American Mahogany (Swietenia macrophylla) with some sections of pine as secondary structural timbers.

When the synagogue was closed the Ark was placed in storage where significant damage was encountered and subsequently put in storage with the National Museum of Ireland in 2004 where it stayed until 2013. In 2012 a decision was made by the Management Committee of the museum to restore the Ark with the intention of its forming a central theme in a newly built Jewish museum. Funding for the restoration was provided by an anonymous supporter of the museum and the Ark was placed with Sven Habermann of Letterfrack Conservation in secure and climatised conditions awaiting reconstruction. At that time the artefact was in bits with some parts like the golden cupola missing. 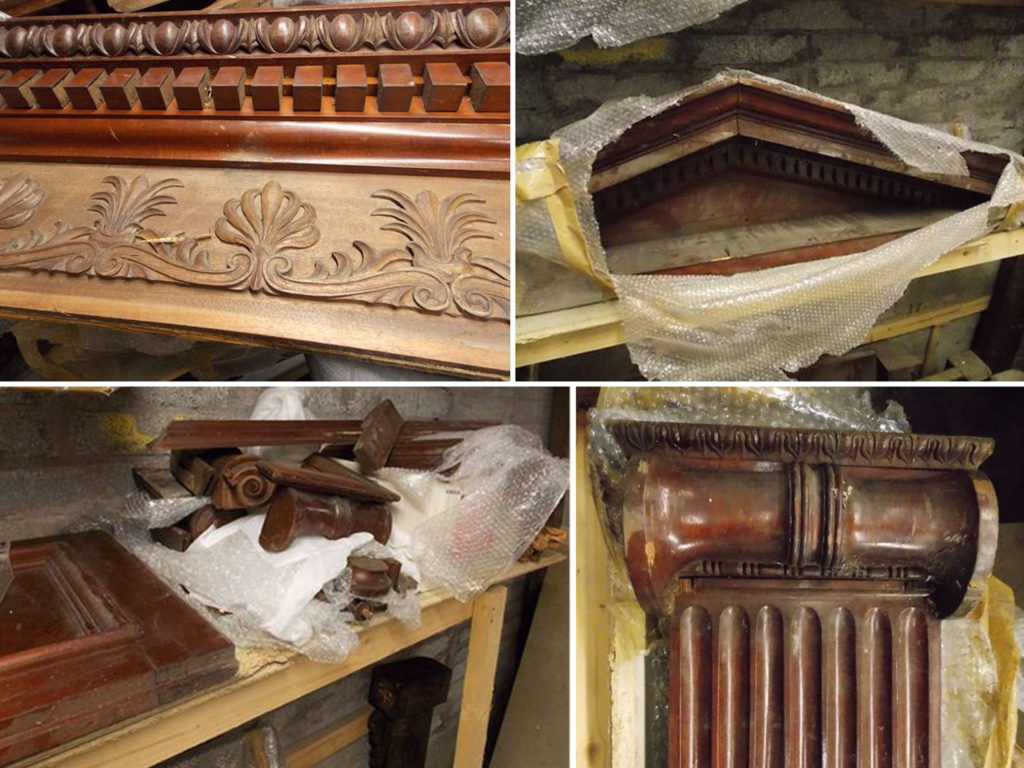 Conservation | Letterfrack is a specialist company employing a team of highly-skilled conservator-restorers, craftspeople and other specialists to provide a professional service and consultancy throughout Ireland in the conservation, restoration and collection care of wooden objects and architectural woodwork to the highest international standards.

Work on the restoration was delayed as the large scale development plans for the museum collapsed due to the economic crises and the unavailability of capital grants. |It was not until 2018 that the Aron Kodesh conservation was regarded to be appropriate as funding for a smaller development was considered for the museum. Once more economic factors overtook the Irish Jewish Museum and plans were again put on hold. However, the work on the Ark was completed in 2019 and a temporary home had to be found to house the newly completed Ark. The museum as it exists was too small to display it the community stepped in to assist and agreed to place it in the Samuel Taca Hall at the Terenure synagogue temporarily. Unfortunately the room was not high enough to place the cupola on top and that is now in storage until the final development of the museum premises. 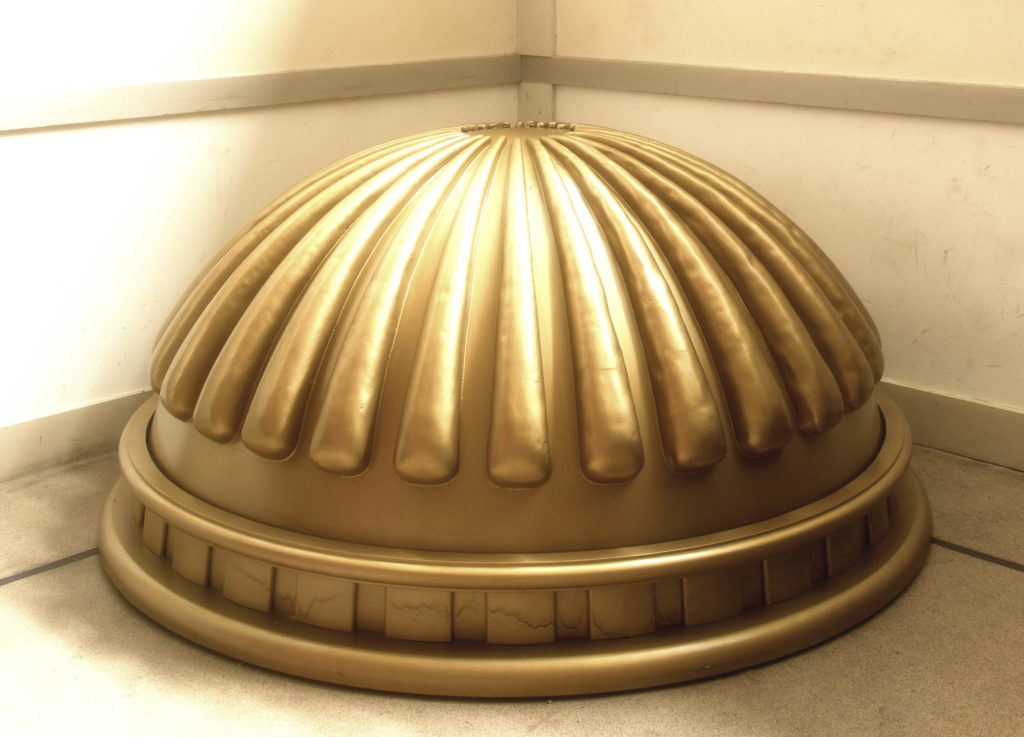 This situation has worked out to the benefit of both the museum and the synagogue as since the pandemic the community have held services in the Samuel Taca Halland the Aron Kodesh from Greenville Hall is once more being used for its initial purpose. 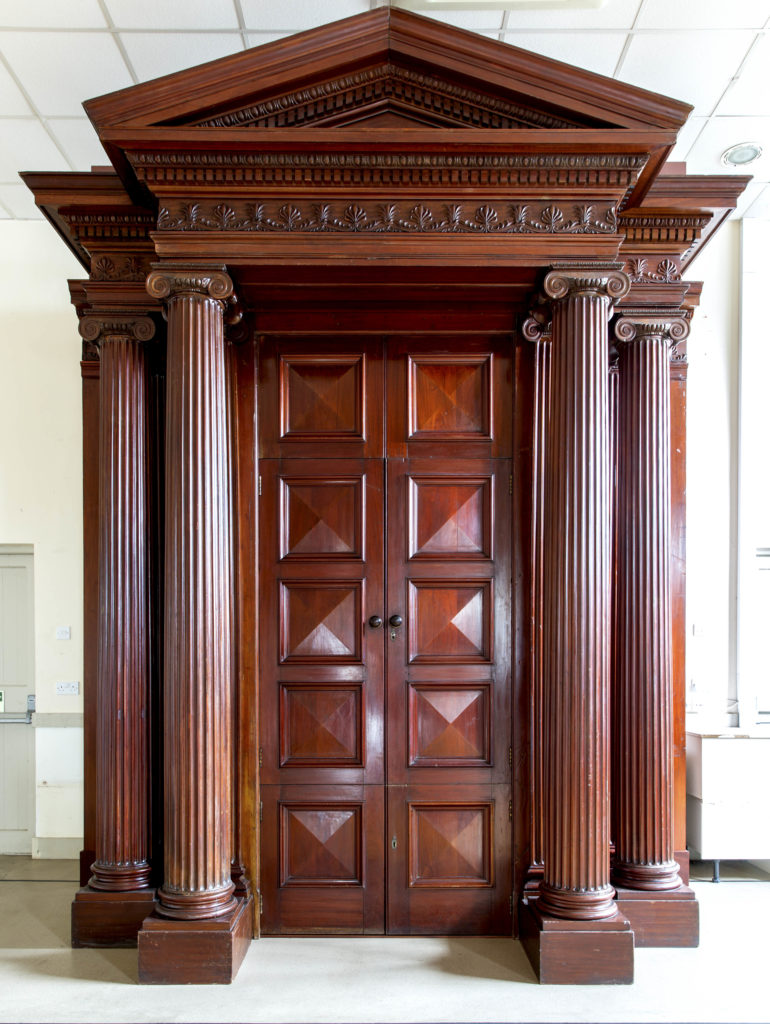