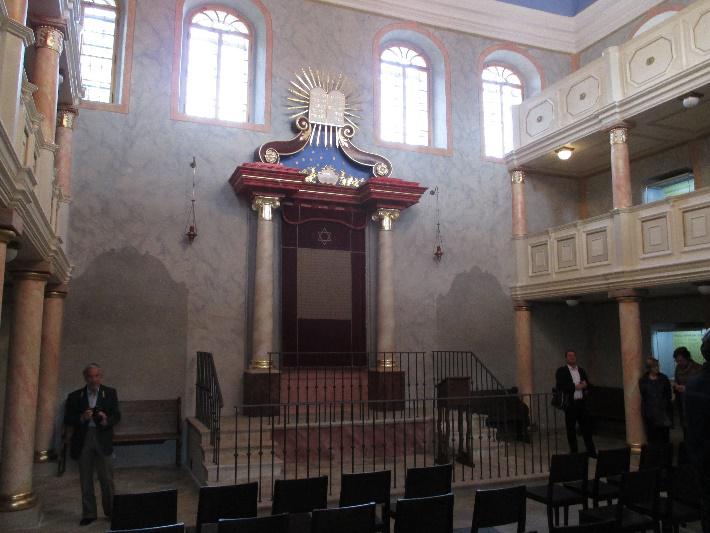 The Dublin Jewish Progressive Synagogue possesses one Torah Scroll which originated in the small town of Brandys-nad-Labem. It is one of 1,564 Czech Scrolls collected in 1942 from congregations across Bohemia and Moravia under a plan to save Jewish treasures from vandalism and plunder of the deserted congregations. Each Scroll was numbered and labelled and hence we know the origins of the Dublin Scroll. It was intended that the Scrolls would be returned to their congregations after the war but as the communities were completely destroyed, the important collection of Jewish artefacts remained as a testimony to the memory of the Jews who had lived in Bohemia and Moravia. It is in this context that David Goldberg delves into the history of the Jews of Brandys, the former home of the Dublin Scroll, to try to understand the lives of the community, their long history of struggles and their eventual annihilation under the Nazis. He recounts the experiences of the son of the leader of the community, Adolf Munk and recalls the 2013 visit to Brandys by members of the Dublin community led by Rabbi Andrew Goldstein.

This monograph is a response to a sermon delivered by Rabbi Dr Andrew Goldstein during the High Holiday services at the Dublin Jewish Progressive Synagogue in 2011. It arises because Dublin possesses one Torah Scroll which originated in the small town of Brandýs-nad-Labem. The sermon was an invitation to research the Scroll and the town; to give it life by understanding the history and development of the Jews of Brandýs; to try and establish the names of the families, their occupations, and the houses where they lived.

The Dublin Scroll is one of eleven which came from Brandýs. There is one in Holland, seven in different parts of the USA, and one each in Israel and U.K. Our scroll is one of 1,564 Czech Scrolls brought to the Westminster Synagogue from Prague in 1964. The Scrolls were collected in 1942 from congregations across Bohemia and Moravia under a plan to save Jewish treasures from the vandalism and plunder of the deserted synagogues. The number 1,729 was painted in red on one roller by the Central Jewish Museum in Prague. It was labeled and catalogued creating a record of where it had come from. Although the Nazis authorized the Jewish plan, the act of rescue belongs to a group of very enlightened Jews in Prague. Every Scroll recovered was sent to the Jewish Museum of Prague where it was given a unique number, labeled and catalogued, creating a record of where it came from. It was here that the number 373 was painted in red on one of the wooden rollers, and engraved on a brass plate attached to the other. As a result of this we know that our Scroll came from Brandýs nad Labem. After the War, it was intended that the Scrolls would be returned to their congregations. As the communities were completely destroyed, what survived was a collection of important Jewish memorabilia, religious and cultural objects. There was an index which identified where it all originated.

Scroll 373 was received by the congregation in Dublin in September 1965. As part of the conditions attached to receiving it, the congregation must dedicate one Shabbat each year to the memory of the community of Brandýs. Since 2011, this has been scheduled in January to commemorate the Transports of the 143 Jews from Brandýs and Kostelec on the 13th and 16th January 1943.

The purpose of this journey into the history of the Jews of Brandýs was to find and reveal them. After a long and arduous study we can hopefully say we do know who they were, where they lived, and what they did. Because there is very little information about the Jews of Brandýs what is known could be written in a few pages. Information from various census documents compiled by the Jewish Museum of Prague suggested that there was a more complicated story to be told not only about the Jews of Brandýs and Kostelec, but about how Jews in Bohemia and Moravia survived the continuous vicissitudes and expulsions they experienced. In the final analysis, the only way to tell this story was to place it within the context of the greater history of the Jews of Bohemia and Moravia. Then the story of the Jews of Brandýs could be understood in context, though it still takes a little imagination to complete the images. We can glean something of the lives they endured through persistent repression. We can see how they gradually achieved their liberty, and achieved their development. Having achieved so much despite such long arduous hardships, they lived to reach freedom only to face annihilation under the Nazis. This is their story which we dedicate to their memory